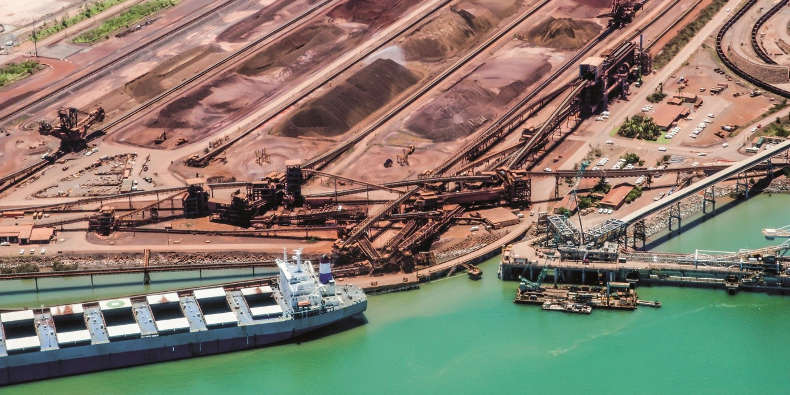 Everyone has seen them – these large bulk carriers sailing across the sea or on the long waterways in Germany. In addition to containers, crude oil, fuels, gas and other products, they also transport bulk materials. And yet, it is often a long way from the source of the bulk material until it reaches the ship.

Speed is of essence

Today, stone coal and ores are still rarely mined in Germany, but mainly in Latin America and Australia as well as in China and Africa. The great challenge here is to quickly transport enormous amounts of bulk material like iron, copper ore or coal out of the underground mine or open-cast mine.

Furthermore, the huge amounts involved typically do not allow economical and quick transport by truck. In the core markets, i.e. Brazil, Chile and Australia, ores are mined in open-cast pits and directly loaded onto conveyer belts by means of dump trucks.

The challenge of transport

These long conveyor belts, which often have a length of up to 25 kilometers, convey the bulk material to the respective loading area for further transport. In most cases, the material is loaded on trains because railway transport generally is the most effective way on account of the high loading capacity. 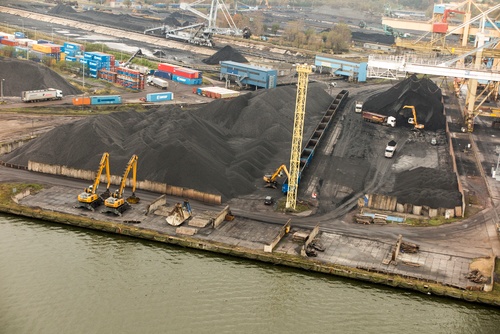 Another reason is that these trains directly run to a port loading terminal where the material is reloaded onto the above mentioned bulk carriers. Such freighters can take volumes of up to 250,000 tons.

Conveyor belts are driven by pulleys. The distinction is made between drive and return or tail pulleys. The shafts of the drive pulleys have diameters from 150 to 800 mm. The typical drive power ranges from 150 to 6,000 kW – this corresponds to more than 8,000 HP.

Our well tried locking assemblies, e.g. the RINGFEDER locking assemblies types RfN 7012, RfN 7015 and RfN 7515, which are typically used for such applications, ensure safe connection of the drum bottom with the pulley shaft.

Another advantage of locking assemblies is that they allow easy installation and removal of the drum during maintenance operations. Typical shaft-hub connections, e.g. keys, would soon reach their load limits here.

During the operation of the conveyor belt, the highest load occurs when the belt is started after it has been in a state of rest: the occurring rotational and bending torques are much higher than those during operation of the belt. This is because tons of bulk material lie on these conveyor belts that are multiple kilometers long, and these have to be brought into motion. As soon as the conveyor belt has started up, i.e. when it is moving, these forces reduce.

Conveyor belts transport extremely heavy weights. The unit for this is GTA: gigatons per annum. Depending on the size of the underground mine or open-cast mine, the annual capacity can amount to up to 40 million tons, corresponding to a transport weight of about 4,500 tons per hour. This means about 3,000 medium-sized cars per hour – 24 hours a day and 7 days a week!

The distance traveled should not be overshadowed by the impressive weight. As already mentioned, conveyor belts often run over distances of up to 25 kilometers and more. This provides some indication of the specific requirements which have to be fulfilled by the drive. The entire conveying distance is usually split up in several transport belts which are driven by separate pulleys.

We normally recommend using the above mentioned standard locking assemblies for pulley applications. Our many years’ experience in the field of frictional clamping connections has been incorporated into our calculation programs in such a manner, that the initial design can be done by a specialist for conveyor technique, without requiring any assistance from us. Nevertheless, particular applications often need to be discussed in detail between the customer and our product management team.

The above described conveyor belts operate around the clock, no matter whether in Brazil, Chile or Australia. Apart from the many drive and return pulleys, there are a lot of other critical components. In the event of an unexpected technical defect – which often causes the standstill of the conveyor belt – the fastest possible recovery of the reliable operation is of the top priority.

Belt downtimes result in costs that quickly sum up to several hundred thousand US dollars – and, on top of this, high penalties amounting to millions may incur for non-delivered tonnages. This clearly exemplifies how critical and important it is that such conveyor systems operate smoothly and reliably. For this reason, proven technical expertise of the manufacturers and suppliers, but also confidence and reliability, are essential aspects for the on-site collaboration with underground pits and open-cast mines.

RINGFEDER is operating worldwide and ready to respond quickly to such scenarios. Our long-standing distribution partners are available almost everywhere and able to provide fast and competent on-site support to our customers in the event of an emergency, repair or maintenance of belt drums.

Ignoring induced forces or the faulty design of belt conveyor pulleys can cause high repair costs. Resulting damage may show itself in shaft breakage, axial movement or plastic deformation of the pulley bottom. Apart from that, downtime losses accrue which can quickly amount to several millions.