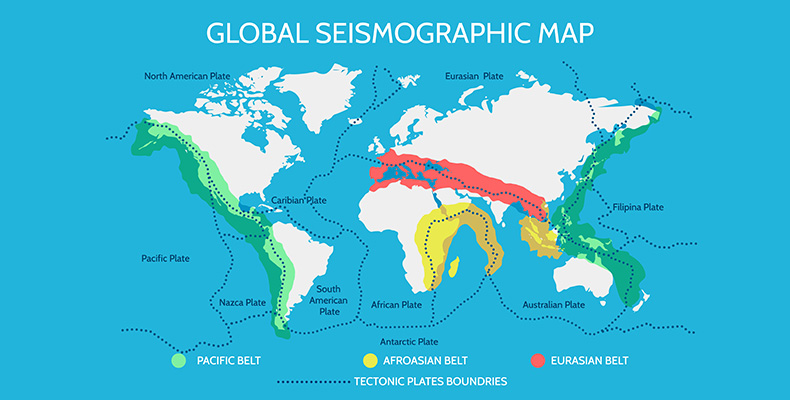 The earth’s crust is the outermost layer of the earth and ranges in depths from approximately 35 to 70 kilometers. It comprises seven large continental plates (Eurasian Plate, North American Plate, South American Plate, Australian Plate, Antarctic Plate and Pacific Plate) as well as about 50 other smaller plates. Though earthquakes may theoretically occur anywhere, they most frequently occur at the edges of these plates.

1.The Pacific Ring of Fire

About 90 percent of all earthquakes – in particular, the strongest ones – occur along the “Pacific Ring of Fire”. It earned its martial name from the numerous volcanoes that line up around the Pacific Ocean like a string of pearls on a length of approx. 40,000 km. The Pacific Ring of Fire is essentially the boundary between the Pacific continental plate and several adjacent plates that move toward the surrounding continental plates of Asia, America, Australia, and the Antarctic.

Because sea floors also slowly move below the continents, so-called “deep-sea trenches” are formed. Beyond these “subduction zones”, the oceanic crust slides beneath the continental crust and causes continental mountains to rise. The enormous subsurface stresses open up magma channels for the numerous volcanoes and trigger strong earthquakes. Affected countries include Indonesia, the Philippines, Japan, USA, Mexico, Peru, and Chile.

The Arabian Plate and the Indian continental plate move northward and collide with the Eurasian Plate. Unlike the Pacific Ring of Fire, however, the earth’s plates collide, raising massive mountain ranges like the Himalayas.

And this phenomenon is still happening today: Studies show that the Indian plate is still pushing into the Eurasian plate at a rate of about 2 to 3.5 cm per year, causing the Himalayas to grow by about 4 to 10 mm each year. For this reason, in particular North India, Nepal, as well as Central and East China must anticipate being hit by strong earthquakes at any time.

As the northern part of the African continental plate pushes against the Eurasian Plate, the European Mediterranean area is also a tectonically active region. Moreover, other smaller plates like the Aegean and the Anatolian Plate also contribute to the development of earthquakes. So far, these geological conditions have not been fully explored.

While the seismic effects are felt particularly often in Italy, Greece and Turkey, the western Mediterranean area is less affected by seismic activities. 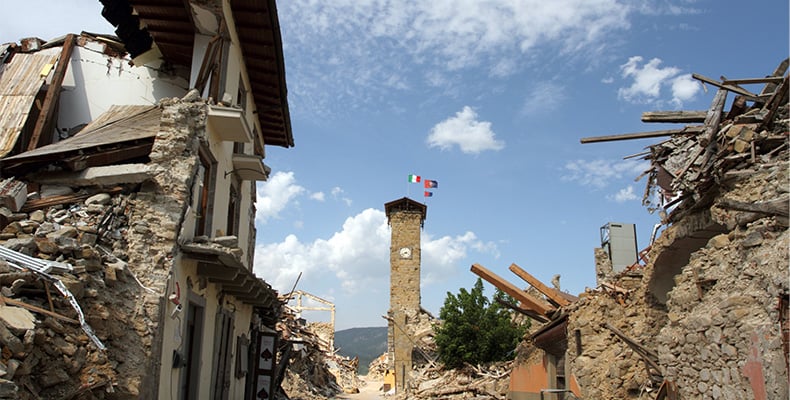 Amatrice - Italy - August 28, 2017 - The center of the country one year after the earthquake

Severe earthquakes regularly occur along the Caribbean Plate. The disastrous earthquake that hit Haiti in 2010 is likely to have remained in the memory of many of us. The cause is that the Caribbean Plate is moving eastward and is slowly sinking beneath the floor of the Atlantic Ocean. On the one hand, this has led to the formation of the Antillean Islands, but on the other hand, it creates enormous rock stresses.

The earth can also shake elsewhere

Due to the drifting continental plates, there are regions on earth that are particularly vulnerable to earthquakes, but this does not only hold true for these regions. There are many other regions on earth where pressures may release suddenly and cause smaller tremors. These are mainly caused by the tectonic release of stress in the countless smaller weakness zones of the earth’s crust. Strong earthquakes that threaten human lives are fortunately rather rare here.

In the next part of our article series about earthquake protection, you will learn how buildings and infrastructure facilities can be secured and protected against earthquakes.

END_OF_DOCUMENT_TOKEN_TO_BE_REPLACED
Earthquakes and Their Effects on the Environment