Earthquakes and Their Effects on the Environment

An earthquake is a measurable shaking of the earth. Tectonic earthquakes are caused by the movements of the tectonic plates (continental plates) that rest on the upper mantle of the earth and move along the fault lines of the earth`s crust (continental drift). If these plates become or collide with each other, pressure builds up until the shear strength is exceeded, resulting in its sudden release.

Earthquakes are also caused by volcanic activities, collapse or subsidence of underground caverns, large landslides or rock slides. In most cases, the earthquake is not one single shake, but several, occurring as foreshocks, main shock and aftershocks.

Particularly devastating for buildings: the soil movements during an earthquake and the resulting loss of soil shear strength can lead to soil liquefaction or soil faults on the earth’s surface substantially endangering the stability of buildings.

What damage can be caused by earthquakes?

On the one hand, this depends on physical factors such as magnitude, duration, and distance to the point where the earthquake originates. On the other hand, this depends on human factors including the population density in the affected area and the predominating building style of architecture.

Depending on where an earthquake occurs - in a sparsely populated region or in a metropolitan area – it can have harmless effects or trigger human catastrophes. One of the reasons for this is that the chances of survival in a simple shed are considerably higher than those in a skyscraper made from concrete and steel that collapses on its residents. Apart from that, the extent of damage to the infrastructure such as streets, supply lines, or factories in densely populated regions is significantly higher.

The economic consequences of earthquakes

A more precise look at the effects caused by earthquake damage also reveals that there is an economic difference when certain regions or cities are hit by earthquakes.

In developing countries or economically weak regions it is still common to accept high financial losses due to earthquakes. Much more has to be done here to improve the seismic design of buildings. In industrialized countries, however, there is a growing expectation that modern buildings and underground infrastructures can withstand even strong earthquakes with limited or no damage at all.

The economic consequences are enormous because neither can a modern society function without interruptions nor can operators, urban administrations, or governments afford the immense costs of the imminent damage.

The earthquake in Christchurch (New Zealand) in September 2010 showed that not only individual buildings were severely affected, but also tenants in adjacent properties. Businesses had only had limited access to their premises, so that they also suffered economic stress. With strength of 6.5, according to the moment magnitude scale, the Christchurch earthquake claimed 185 lives and caused the following damage:

Another well-known example is the Tōhoku Earthquake that struck the high-tech country of Japan in 2011 and registered at a 9 on the moment magnitude scale. More than 400,000 buildings sustained total or partial collapse. About 470,000 people had to be evacuated and sheltered in emergency housing. And let us not forget, the tsunami caused by the earthquake and the explosions in the nuclear power station in Fukushima that released radioactivity and contaminated the region. With losses of about 250 billion euros, the Tōhoku Earthquake is one of the most expensive earthquakes of all time. 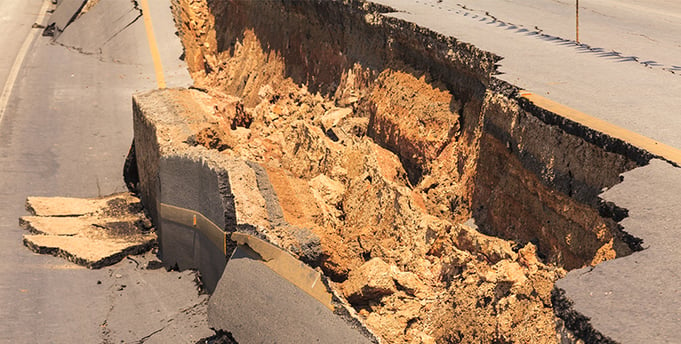 Effects must be considered in the long term

After an earthquake, buildings, industrial facilities, and infrastructures have to be re-constructed. Not only does this cost money, but it also takes a long time to do so. Another financial aspect is that revenues are reduced after an earthquake. Destroyed factories are no longer able to produce, defective power stations cannot deliver energy and the fear of further quakes keeps tourists away from affected regions.

The areas which are particularly earthquake-prone and most affected will be discussed in the next part of our article series about earthquake protection, which is going to be published in mid-March.