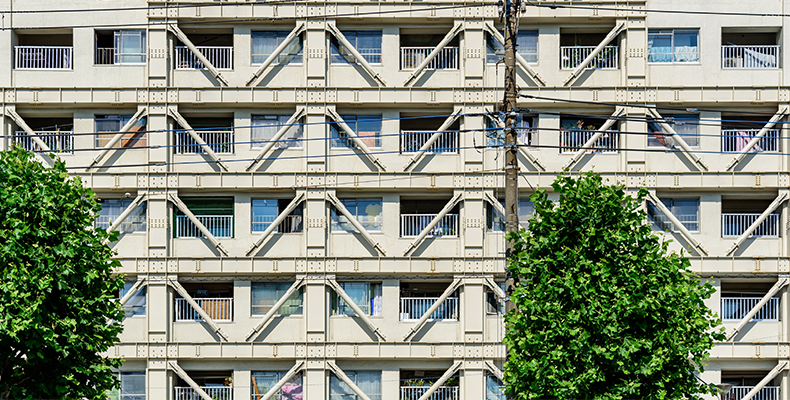 Though large earthquakes do not occur frequently, they constitute one of the most devastating and destructive dangers for the built environment. The fact that an ever-growing percentage of the world population is projected to live in urban areas highlights the need for mitigating the risks in earthquake-prone areas. What are the impacts of earthquakes on buildings? And why is earthquake-resistant construction more important than ever?

How many earthquakes occur worldwide?

According to details published by the National Earthquake Information Center (NEIC) in Rockville, Maryland, USA, on average 20,000 earthquakes occur worldwide every year; that makes about 55 earthquakes per day.

Long-term studies, which have been conducted since around 1900, show that about 16 large earthquakes can be expected to occur every year. These include 15 magnitude-7 earthquakes and one with a magnitude of 8 or even higher. The recordings made over the last 40 to 50 years reveal that the number of the largest earthquakes has exceeded the average by over a dozen times. This makes the protection of buildings so much more important.1

What is the impact of earthquakes on buildings?

During larger earthquakes, enormous energy waves travel through the earth’s interior that can felt at the earth’s surface through the shaking ground. The soil moves vertically as well as horizontally, and everything that stands upon it moves along.

On the one hand, earthquakes have a destabilizing effect on the structure of buildings because the occurring soil shakings cause the horizontal and vertical building components to oscillate. On the other hand, landslides or soil liquefaction can lead to severe consequential losses.

Huge damage due to large earthquakes

In the morning of October 8, 2005, Assad Jammu and Kashmirsowie in the Pakistani Province Khyber-Pakhtunkhwaein were hit by a heavy magnitude-7.6 mW earthquake. About 100,000 people died and more than 138,000 people were seriously injured. In addition, about 3.5 million people were displaced. Buildings and infrastructure were massively damaged as a result of ground movement:

While the estimated total costs of the damage amounted to about US$ 5.2 billion, the causes of the tremendous destruction are partly attributable to the fact that most of the buildings had been erected only in partial compliance with construction codes and without seismic design.2

It thus becomes evident that buildings and infrastructures should be designed and built to resist earthquakes. The benefits are clear, especially in areas that are particularly prone to earthquakes:

Seismic rules in the spotlight

Do you know the saying: Earthquakes do not kill people, but buildings do? It, therefore, stands to reason why seismic standards and earthquake regulations are indispensable and of vital importance to protect life and property.

Design fundamentals and guidelines for the evaluation of earthquake forces are provided by the application of engineering procedures, principles and criteria for the seismic design and the construction of earthquake-prone buildings (Michael R. Lindeburg, Majid Baradar, 2001). The basic requirements in terms of seismic strength of a building depend on the type of building, its location, and the implementation of seismic design and criteria (F. Omori, 1900). Yet, the stability of the ground must also be checked before starting the construction.

What qualifies as an earthquake-resistant design?

Proper seismic design and construction provide buildings with the appropriate stiffness, strength, and resilience (Christopher Arnold, Robert Reitherman, 1982). For this reason, buildings should – in compliance with applicable construction codes – be designed such that they cannot collapse and are able to resist earthquakes that are expected to occur at the site of construction.

However, simply complying with the rules does not ensure that buildings and infrastructure are automatically protected against earthquakes. This is because the design of buildings that blindly follows some of the earthquake regulations does not guarantee that the building is able to withstand heavy damage or collapse (Karl-Heinz Gotz, et al. McGraw-Hill, 1989). In fact, the poor seismic design of the structure can still lead to the collapse or destruction of a building.

What progress has been made to earthquake protection?

Thanks to intensive research, considerable progress has been made in the field of earthquake protection during the last decades: new materials and innovative solutions have been developed, and the fundamental design philosophy has changed. These methods can derive the basic approach to the earthquake-proof design of buildings and infrastructure.

First, it is essential to understand the possible impacts of earthquakes on structures built by humans. When an earthquake occurs, shock waves travel in all directions through the soil at short and fast intervals. While buildings are typically designed to cope with vertical forces from their mass and gravity, they are not able to withstand lateral forces that occur during earthquakes.

But it is exactly this horizontal load that causes walls, floors, columns, beams, and the elements connecting them to vibrate. The varying movement of the lower and upper parts of the building provokes extreme stresses that cause the supporting frame to break and, finally, the entire structure to collapse.4 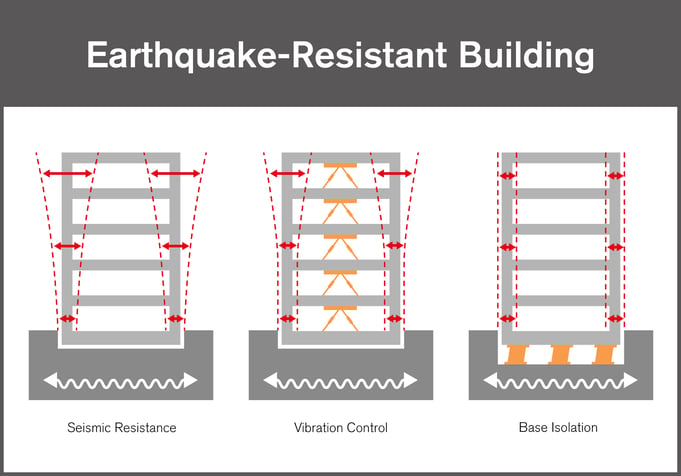 The next part of our article series about earthquake protection will provide you with more information on how you can safeguard and protect buildings as well as infrastructure facilities against earthquakes.

Earthquakes and Their Effects on the Environment