If a braking device fails, or in the event of an operating error, moving masses can cause significant damage upon collision or impact. To avoid this, you should use a damping system that is tailored to your application, because the removal of such damage usually costs more than the purchase of suitable shock absorbing units.

Requirements for a damper

In order to prevent or mitigate possible damage due to the above mentioned situations of a brake failure or operating error, your main focus should be directed at the optimum protection of components and machines.

Costs grow increasingly larger, the more the occurring impact force exceeds the permissible support force of the component. This is because the occurring support force is solely determined by the deformation member between the moving mass and the fixed point of impact. Therefore, the focus lies here on keeping the force as low as possible – ideally below the permissible force of all masses involved in the impact.

Moving masses only come to a standstill, if the motion energy is completely converted into another form of energy, i.e. thermal energy due to friction during braking, or elastic energy due to deformation. In both cases, the force acts over a longer distance. The product of force and distance must correspond with the initial motion energy so that the moving mass comes to a stop.

The physical unit of energy is indicated in joule (J) or newtonmeter (Nm). If the distance is not sufficient to bring the masses to a state of rest, the force will increase immensely at the end of the travel, and will lead to undesired destruction. For this reason, you always have to take care that the entire motion energy can be absorbed by the “crash element”. However, the required installation space is often not available. In this case, you have to find a compromise by permitting a higher support force and reinforcing the involved shock elements.

Of course, you as an operator are looking for the most economically priced impact protection elements, especially because they do not have any influence on the actual operation of a machine or plant.

The less frequent a crash occurs or can occur, the more likely it is that a single-use solution is selected which can be easily replaced – instead of more expensive energy absorbing devices that can be used several times.

Even at the end of the last century, simple rubber cushions or plastic pads were often installed to end positions. This had been done for budget reasons and without having analyzed in detail the magnitude of the energy induced. The only aspect focused on was the function of the machine. Then when collision happened that resulted in damage to valuable machines or components, this was regarded as an unforeseeable event. Expensive replacement parts had to be procured, leading to cost-intensive downtimes. Correspondingly, the rubber cushions and plastic pads only had a kind of ‘make-believe’ function.

For applications which require reliable protection, there are of course a variety of buffers and energy absorbers available: Here the distinction is made between shock absorbing units which can only be used once, and those which can be used several times.

Dampers for one-time use

These shock absorbing elements need a relatively large area. Calculation and installation are more complex, and corrosion may occur when they come into contact with steel. In addition, the production of the basic material, aluminum, is cost and energy consuming.

These elements have a lower energy absorption capacity referred to the maximum support force in the event of a crash. When installing these elements, contact or corrosion protection is required, or, alternatively, expensive stainless steel can be used.

These units are tailored to an application and convert motion energy into deformation energy. A moving mass can safely be brought to a rest while full function of all adjacent components is maintained, for example, by using the shock absorbing units DEFORM plus®. These elements have to be replaced after an impact has occurred, because they can only be used once.

Although coil springs virtually do not possess any damping properties, because they have a rebound effect of 100%, they are nevertheless often used for shock absorption. Compared to OSP shock absorbing units, coil springs have much larger dimensions, but have the same energy absorption capacity. Coil springs exhibit a linear-diagonal increase in force, but this also means that they have the double spring travel when compared to a DEFORM plus® shock absorbing element.

Disk springs also have a linear-diagonal increase in force, which – compared to the deflection of an OSP shock absorbing unit – also results in a double spring travel. Energy absorption is the same, however, they have much larger dimensions. Since disk springs only have minor damping capabilities, they also exhibit high rebound. 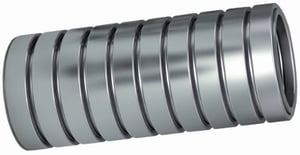 The rebound effect is lower by one third with Friction Springs which are usually able to dampen two thirds of the induced energy.

With the same energy absorption capacity, hydraulic dampers have larger dimensions than an OSP shock absorbing unit. Hydraulic dampers provide high damping with the support force being dependent on the velocity.

Under certain conditions oil may drain out of hydraulic dampers. Since oil is a flammable liquid, these types of dampers have to be excluded for use in certain applications, notably in those where sparks are flying or for which particular environmental regulations have to be observed. In the event of longer times of standstill, a so-called “clamping effect” may occur. This happens when the lubricant between the seal and the piston has dried up after a longer standstill, so that higher friction temporarily occurs.

Cellular plastic buffers are much greater in size than an OSP shock absorbing unit which is comparable in terms of energy absorption. During deflection, cellular plastic buffers exhibit a progressive increase in force. Referred to the maximum support force, they absorb less energy than e.g. a DEFORM plus® damper.

With comparable energy absorption, these dampers have much larger dimensions than OSP shock absorbing units. Due to the progressive increase in force during deflection, referred to the maximum support force, these dampers also exhibit lower energy absorption than an OSP shock absorbing unit. An exception to this are the DEFORM plus® R dampers. On account of their built-in force limitation, they are able to absorb more energy than comparable dampers.

The decision as to which damping system you use for your application depends on various factors. Our colleagues from the Engineering Department would be happy to advise you on the best possible protection of your machines and their components. Just leave your inquiry or question, and we will get back to you.

Our next blog article will provide you with more details about our shock absorbing units DEFORM plus®.

Ignoring induced forces or the faulty design of belt conveyor pulleys can cause high repair costs. Resulting damage may show itself in shaft breakage, axial movement or plastic deformation of the pulley bottom. Apart from that, downtime losses accrue which can quickly amount to several millions.