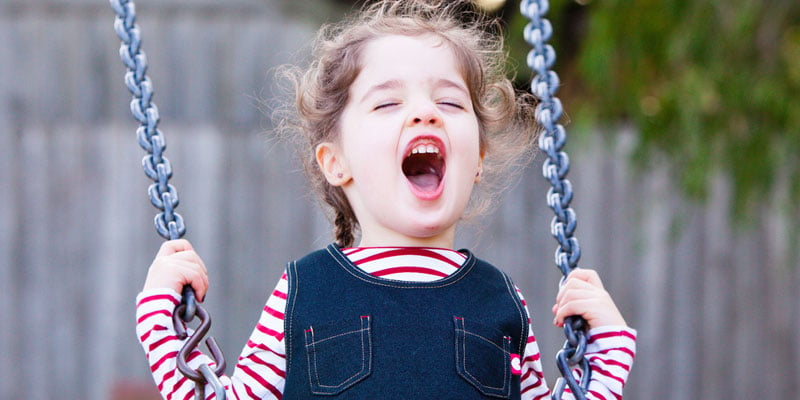 Every vibratory system consists of an exciter and a mass with a force-transmitting medium in-between. Resonance is caused if this system is periodically excited with its natural frequency. In the field of mechanical engineering, resonance is an undesired phenomenon.

Fun is biggest after having learned how to swing correctly - what is in the right frequency.

The shattering wine glass, the bridge that builds up vibrations or the motor that does not run smoothly: The phenomenon of resonance always plays an essential role. Every vibratory system (oscillator) can be described entirely by mass and stiffness. From this, the natural frequency can be derived mathematically.

When a pendulum is moved out of its position of rest it will carry out a motion: it swings. The frequency with which this vibration is performed is called the natural frequency. The displacement of the pendulum from its equilibrium position is referred to as the ‘amplitude’. The influence of the air resistance will dampen the amplitude which, as a result, gets smaller.

Oscillator and exciter in common mode

If this excitation frequency is close to the natural frequency, vibrations will build up undamped to infinitely high amplitudes. These are referred to as resonance.

A child that learned how to swing correctly will pump the swing at just the right frequency (the natural frequency). The amplitude gets higher and higher with each swing. Vibrations build up. The child will be happy about the height it reaches – a phenomenon of resonance that is exceptionally welcome.

In mechanical engineering and plant construction, the phenomenon of resonance is not desirable. The resonance and the build-up of vibrations reduce the ability for machines to run smoothly. And this can lead to serious problems.

Amplitude (amplitude of vibration): displacement of a vibration from its position of rest (arithmetic mean) up to its maximum value.

Frequency (Latin: frequentia): number of vibrations per unit of time. Reciprocal value of the period. The measurement of the number of times that a periodic event recurs successively. Expressed in hertz (Hz).

Natural frequency: A frequency at which a system oscillates after a one-time excitation.

Resonance (Latin: resonare = sounding, echoing): General: reverberation, i.e. the repetition of a sound by reflection of sound waves from a surface/event. Physics: co-vibration of an oscillatory system when the latter is periodically excited. Prerequisite: The excitation frequency is equal or close to the natural frequency of the system being excited.

Resonance frequency: a frequency at which a system vibrates strongly, i.e. with a particularly high amplitude.

Vibration (= oscillation): sinusoidal quantity, periodic fluctuation about a mean value or reference point.  Used in mechanics, acoustics and electrical engineering as well as in biology and economy.

The robust drill on the robot arm of the Mars Rover Curiosity helps scoop rock dust on Mars – a milestone for researchers. A friction spring made of stainless steel dampens the forces generated during the drilling process and prevents any resonance phenomena.

END_OF_DOCUMENT_TOKEN_TO_BE_REPLACED
Fun Facts: Resonance or if system vibrations build up

When thinking of resonance and race tracks the most obvious link appears to be the roaring of engines. But, it actually covers a much broader scope, which has been exhibited by Renault’s clever engineers at Formula 1.