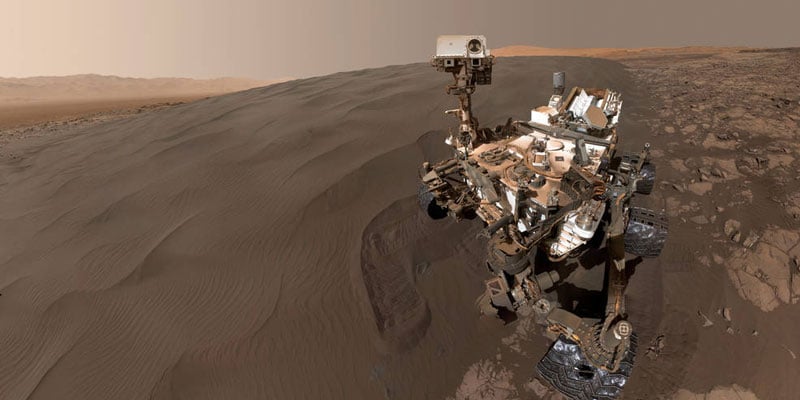 The robust drill on the robot arm of the Mars Rover Curiosity helps scoop rock dust on Mars – a milestone for researchers. A friction spring made of stainless steel dampens the forces generated during the drilling process and prevents any resonance phenomena.

Space is calling. Infinite vastness – and almost infinite opportunities to test innovative technology in border areas. During each space mission, neighboring planets, moons and even destinations outside of our solar system are being explored – and, at the same time, components and systems are tested under extremely severe conditions. These components and systems are often specifically developed for this purpose.

The Mars rover Curiosity is equipped with some of these custom-made technologies. During two precedent expeditions to Mars, NASA technology did not withstand these conditions for an extended time. The result: Two rover wrecks on our red neighbor. Curiosity was supposed to better cope with these conditions than its predecessors. Instead of solar energy systems, a plutonium generator is currently supplying the rover with energy. This generator has a long lifespan and may even still function when the first manned space flight will reach the Red Planet in the 2030’s.

Durability was also a must for the tools on board the Curiosity which weighs almost one ton: two cameras, spectrometer, a powerful laser, a telescope and a drill. The predecessors did not have a drill. Along with a small scoop, it is part of a two meter long robot arm with three joints.  The possibility to collect and analyze stone dust was a milestone for the researchers in the history of the Mars mission. Correct operation of the drill had been ascertained beforehand. On earth, they had drilled more than 1200 holes into the most diverse kinds of rock by using eight different percussion drills, because on Mars, it simply had to work perfectly. For the first time, a research robot was to drill into stone in a place other than the earth. The hardness and composition of the individual rock samples were not known in detail, though some Mars meteorites had given some initial findings. Like with all terrestrial planets, basalts and quartz-rich intrusive rocks as well as olivine were predominant. These have a relatively high hardness, i.e. a Mohs hardness of six to eight. For comparison: a diamond has a Mohs hardness of 10. The drill had to be capable of withstanding this and able to powder the Mars rocks in spite of these harsh conditions.

The friction spring as a buffer

The California-based Jet Propulsion Laboratory (JPL), which builds spacecrafts for NASA, finally opted for a solution where a special friction spring effectively ensured robustness. It dampens the impacts of the drill and absorbs the occurring kinetic energy that can amount up to six Joule. In this way, the entire sensitive system is protected against damage while collecting soil samples. The element that has a diameter of only 18 mm was specifically developed for Curiosity by RINGFEDER POWER TRANSMISSION. It is self-evident that both the element and the energy supply were not allowed to fail – not even at such extreme temperatures ranging from -133°C to 30°C and strong dust storms. On top of that, the damping element had to be able to come up to the characteristics of the Mars atmosphere with pressures of 6 10−3 bar, i.e. able to work in vacuum.

360° View of Curiosity on the Mars (Click and hold to look around)
Please use a Mozilla or Google Chrome browser to look at the video, unfortunately it does not work with the Internet-Explorer.

Friction springs, which damp high forces in spite of their relatively small dimensions, are used for applications in mechanical engineering, aviation as well as for earthquake protection in buildings and power supply facilities. They consist of inner and outer rings that interact via conical contact surfaces and use a lubricant tailored to the respective application. As a standard, the friction springs absorb 66 per cent of the induced energy. The component is made from stainless steel and has been specifically developed to fulfill the requirements of the Mars mission. Instead of using the conventional lubricant, the component for the Mars robot has been designed with a coating.

After various practical tests at JPL, the friction spring which is a small yet decisive element of the Mars rover Curiosity started its journey in 2012. Everything worked out perfectly. After the first borehole in the legendary Martian rock “John Klein”, many further holes were drilled. Since then, the "Powder Acquisition Drill System (PADS)“ has been regularly drilling holes to a depth of 5 cm and a diameter of 1.6 cm, and acquires powdered samples for further analyses. Curiosity accomplished its primary mission in 2014, but is still en route. Mid of January 2016, Curiosity transmitted a selfie to earth which shows it digging in the so-called Namib Dune.

Everyone has seen them – these large bulk carriers sailing across the sea or on the long waterways in Germany. In addition to containers, crude oil, fuels, gas and other products, they also transport bulk materials. And yet, it is often a long way from the source of the bulk material until it reaches the ship.